Elle is in her "off-week" of her Irinotecan treatment. She finishes it next week and then has a CT scan on February 8 and a PET scan on the 10th. So fingers crossed... And she is handling it like a pro. As always, she is full of energy and never stops moving. It's an amazing thing to behold.

And now some photos! First is one of Davey and Ellie showing off their snowman: 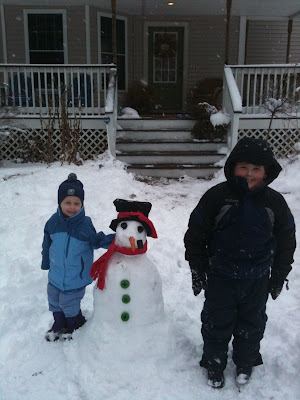 Next up is Elle in her fancy red dress and coat for her birthday a couple of weeks ago: 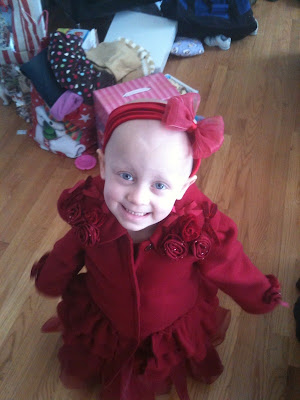 And finally we have Elle in her fancy dress and sporting the classy red bow as she orders steak at Bugaboo Creek. 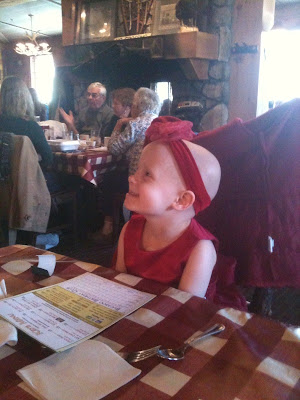 Do I even have to say that she charmed the entire wait staff? I didn't think so...

My apologies for the month-long absence of news. Holidays kick in and its like you completely lose track of time. So here's what we've been up to.

Elle finished the round of chemo with Etoposide and Ifosfamide. The result from the scans were that there wasn't any real shrinkage of the tumor. BUT, it did halt it's growth and stop it from being active. The PET scan showed the mass as a gray color, which denotes a lack of cellular activity.

So with that, and after a three-week rest period, Elle has begun her next round of chemo. Our old friend Irinotecan is back for a three-week stay (one bag by IV five days a week, with a week-break between weeks two and three). And for the first week she has been taking an oral chemo drug called Temozolomide. Now, if you look this up you will see that it is primarily used for brain tumors...

Elle does not have a brain tumor.

This drug is good at interrupting DNA growth and triggering cell death. So hopefully it will do the same with Elle's tumor. I would guess once the irinotecan ends we'll have a break and then another set of scans. So fingers crossed and all that.

As for the tumor and future surgery...we're essentially on standby with Children's. The surgeon has given the oncologists a size for the tumor at which he would be comfortable in performing the surgery. Once we hit that size, we go down. No waiting around.

So, besides all the medical stuff, Elle is still a ball of fire. Running around, ordering us to do things, dancing, singing, occasionally delivering a forearm shiver to my nose...she does it all. She and her brother had a great Christmas. Elle turned five on January 10 (Davey turned eight on December 20) and enjoyed a celebratory lunch at Bugaboo Creek with the family. And yes, pictures will be forthcoming. And much sooner than a month from now.