We met with the doctors at Dana-Farber yesterday. Unfortunately, her tumor's size, combined with its location, makes radiation therapy a non-starter. The resultant damage to surrounding tissue would be too great.

We've also exhausted the conventional treatments for PPB. Which means we are now into the more "fingers crossed" types of treatments.

We're starting on Monday with a re-visit to the Etoposide/Ifosfamide treatment she had after the surgery date was canceled in December. That combo actually halted the growth of the tumor. So hopefully we will get a similar result.

There is another treatment called Anti-angiogenesis, which targets the blood supply to the tumor. This would be a combo of low-dose etoposide on a regular basis combined with Celebrex. Yes, it's originally an arthritis drug that got some bad press because of related drugs like it that were causing heart attacks in elderly people. But Celebrex survived, in part because it has shown some promise in cancer treatment in combination with chemotherapy.

And then there are the "Phase I" trials, where a patient is given a new treatment to find out how safe it is and to find the best dose for future studies.

Beth and I decided to pursue the chemo options while also making Elle available for the Phase I trials. Basically, we are leaving no stone unturned.

It was hard to get that news yesterday. You are in a weird place when you are disappointed that the doctors don't want to irradiate your daughter's chest. But I still believe that Elle is going to beat this thing. I can't see another outcome. She is just too damned stubborn.
Posted by Dave at 10:57 AM 5 comments:

Back To The Drawing Board

Elle's latest round of chemo just finished and, unfortunately, the tumor hasn't stopped growing. On the upside, the rate of growth was slowed. And, most importantly, it is still just the single tumor. Even more importantly, Elle is still full of energy and positive attitude.

So there are a few things that could happen now. We could try more chemo. We could go ahead with radiation therapy. There are some Phase 1 trials at Dana Farber that could be investigated. And there is discussion of a possibly biopsy. Apparently, in extremely rare cases, the type of cancer can change. So there are still a lot of options and choices on the table.

It's another disappointment, but actually better than the last couple of times. But in the end we will beat this thing. Elle simply won't allow any other outcome. 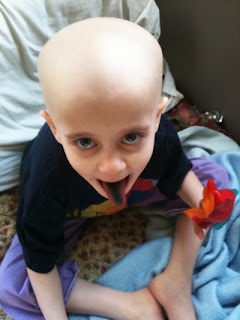 My sister-in-law's sister-in-law, Michelle Harlfinger, is doing a charity walk in Massachusetts, the 11th Annual Champions Fighting Cancer Walk. She is graciously and wonderfully walking for Elle. So if you can give little, please visit her page. Because everyone should be able to get the care Elle is getting.