Who Is Elle Rooting For In The World Series?

Considering we are all die-hard Sox fans, I think the answer is obvious. But courtesy of our good friends Joan and John in New Jersey, Elle makes the definitive statement. 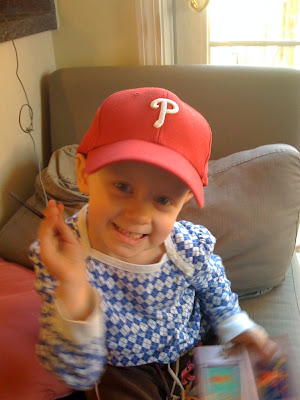 Just a quick post of Elle and Davey in their Halloween garb! 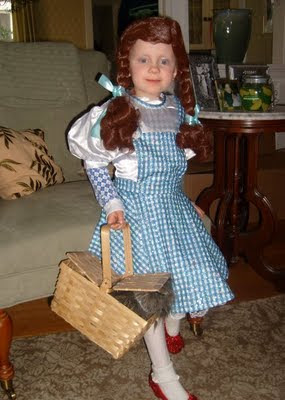 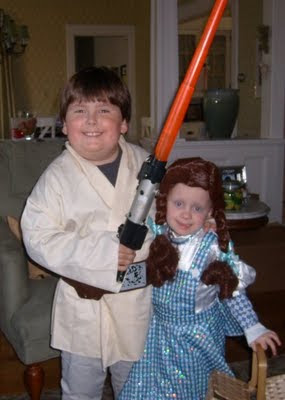 Elle finally got in for her VAC on Friday and came home late this morning. It went as easy as these kind of things can. Beth went with her and took one for the team by sleeping on those god-awful couches. Elle was in a good mood the whole time, though she decided to complain between the hours of 12 and 3 in the morning. Which didn't make that couch any more comfortable.

We also have a better idea on when surgery will occur. It's now "before year's end." So anytime between now and the end of December we'll finally get that surgery done. Which is a good thing...it really is. But it's still hell to have to choose to take your daughter's lung out.

But for now, the focus is on the Halloween Parade tomorrow in the center of town. All the kids dress in their costumes and follow the Headless Horseman down Main Street. Elle will be Dorothy and David is Luke Skywalker. There are rumors I may be getting dressed up as well...not likely, but possible.

Elle's chemo was delayed...again...until next Tuesday. The reason is b/c one element of her white cell count was down again. This time, though, we may know why.

There has been a recent issue with Elle's two lines. The issue is that Miss Elle is sick of her two lines and decided that playing with, twisting and swinging them was the best way to express that displeasure. And so both lines developed breaks. They were small, but needed to be repaired. So they were, but they give her a large dose of antibiotics at the same time. So this happened twice, and the theory is that this may have impacted the development of whatever it is in her white cell count we need to grow. So we are giving her one more week and laying off the Bactrum this weekend. Hopefully that will do it.

Other than that, things have been pretty mellow for the girl. The "big deal" is that she has her Dorothy outfit for Halloween. And yes, as soon as we have the whole ensemble on her, there will be pictures posted.

No Chemo Until Tuesday

A slight change of plans. Elle's white cell count was a little low on Tuesday but had a lot of new white cells forming. So the decision was made to delay the admittance for her VAC round until this upcoming Tuesday. Not a big deal; these kinds of delays are common. Still, it's a little nerve-wracking when it happens.

She handled her CT and PET scans like a champ. Older men, athletes even, freak out and have to be sedated when they enter these machines. Elle just lays there and occasionally snoozes. Ain't no one tougher than my little girl.

This week will be a little busy for Elle. She is getting her next round of scans to see how the chemo has been doing. And then Wednesday, right after her PET, she goes into Maine Med for her VAC round of chemo. This is the easier of the two; it goes pretty quickly over the first day and there's only one night in the hospital. Easier is a relative term, though. Sleeping in the hospital is tough and I admire the hell out of Beth for doing it each and every time.

The other big news is Elle has discovered and fallen in love with "The Wizard of Oz." She has had the DVD for four days and has watched it about 9,374 times so far. I think she likes it.