Raising the Blues is a non-profit that visits sick children and uses the Blues as a way to raise their spirits and spark an interest in music. You can read more about them here. This is the organization that came to the hospital when Elle was in last week for her chemo. TJ Wheeler was the blues musician who came to visit and Elle loved every second of it. Here are a couple of photos that Beth took. 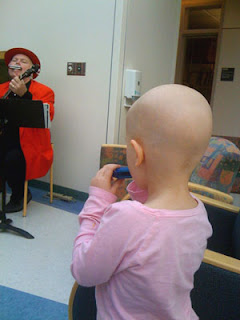 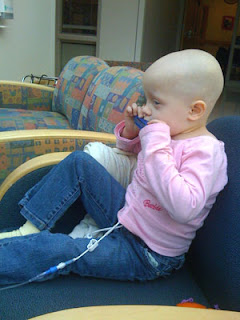 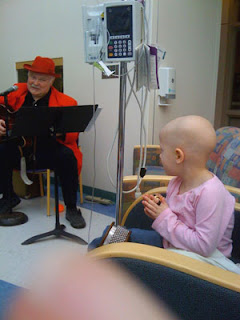 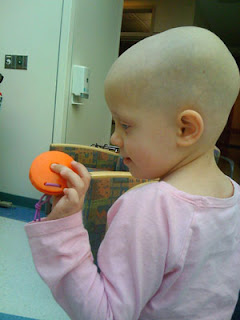 You can also find a couple more photos of Elle on the Raising The Blues website under the "Photo/Video" link.

Not that it is ever that easy, but Elle's chemo last week went easier than expected. They decided to do another round of VAC as opposed to the doxo/cisplatin combo. We aren't sure exactly why, but our guess is that it's because she recovers more quickly from the VAC and with surgery on the horizon, the faster Elle is back at a level to do surgery, the better. So rather than spend three days in the hospital, Elle and Beth were there for just the overnight and left the next morning.

Not that there still wasn't a lot for Elle to do. There was a blues player that does music therapy for the kids visiting and Elle was all over that. To the point she was trading riffs with the guy on a harmonica. Which they then gave Elle to keep. Because Elle...is Elle.

And then two therapy dogs (Golden Retrievers) visited. Elle enjoyed that as well. So she had a lot packed into her 24-hour stay.

But that is it now for the chemo until the surgery occurs.

Just an update. Elle has a round of Doxo/Cisplatin starting tomorrow. She should be out Friday morning *knock on wood*. Beth will be going in with her as always. Sleeping on those couches...she is a brave, brave woman.

Elle is still kicking maximum ass; energy at 100+ and as feisty as ever. She told me yesterday that if I didn't give her a cookie she would "hit me 22 times...with power!" It was hard not to laugh as I sternly told her that wasn't an acceptable way to ask for a cookie. She will also be playing pre-school basketball this year. Elle with a large ball that is expected to be thrown at people...this could be interesting.

Elle is doing well. She is getting vincristine pushes for the next couple of weeks as we await word of when her surgery will take place (between now and year's end). She is growing peach fuzz on her head that is coming in pitch black. Of course, with the post-surgery chemo it will fall back out and knowing Elle she'll will her hair to be blond the next time it grows back. And then it will be blond because what Elle wants, Elle gets. Once you accept that, life goes a little easier.

And with that, here are two videos of Elle jumping in a huge pile of leaves. She decimated it about a dozen times and made me re-rake it over and over. The kid is a grade-A leaf jumper.