We even un-clamped our line when Daddy had to flush it out. Because we all know how forgetful I am when it comes to that.

And once again we drew our own blood for the visiting nurse. She truly has an iron will.

But the big deal today was hats. Oh, the hats are beginning to come rolling in.

I don't remember if I mentioned it here, but I told people that I would like to collect hats for Elle once her almost-certain hair loss from the chemo begins. Hats from wherever people happen to be. Sports hats, regional styles...what have you.

Well, we've gotten a few in the past two days. And I was thinking we would try to have Elle show off her hats and then post the pictures, as long as she would let us take a picture of her.

Today Elle was very amenable to the idea. And so we have our first hat display. It was sent to Elle by my wife's close friend Henley, her husband Shaun and their daughter Lamira. They live in Texas, and you know what kind of hat they like to wear in Texas... 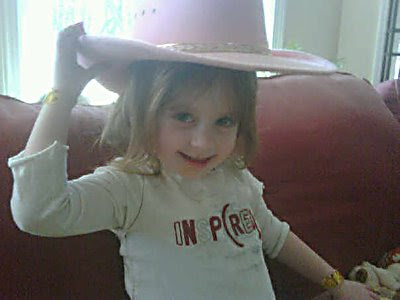 We think it fits her very nicely.