We all went over to Nana and Bing's for a fine Easter feast yesterday. That was preceded by the annual Egg Hunt and Candy Grab. Then we got dressed. First, Davey: 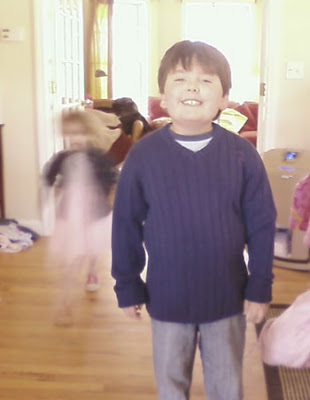 Very J-Crew, the lad is. You could hit a ballgame or go sailing in that outfit. You'll notice that pink blur in the background. That would be an Elle fueled by half of a Hershey Bar. And not one of those small ones. Here she is in a rare moment of stillness: 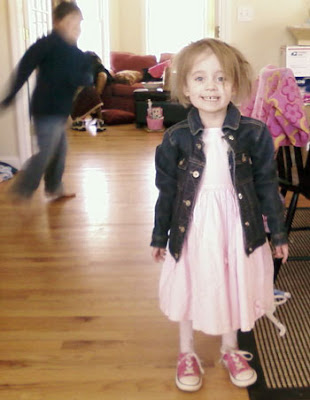 How awesome is that? I think this should be the standard for Easter outfits. Elle rocks the punk look like no one else. She makes Patti Smith look like a flower girl. And that blue blur is Davey after a couple of handfuls of Swedish Fish. That I was able to get still photos of these guys is a miracle of Cana-esque proportions.

The Easter repast was excellent, as always. We filled up on good food and good times. Then we headed back in the late afternoon. Once there, Elle discovered she had a box of pink Peeps in her basket from the morning.

Now, you may remember that in a previous post I called her "my little Cossack." Well, I should have been thinker bigger. Like Catherine the Great. I'm guessing that these Peeps displeased Elle is some fashion... 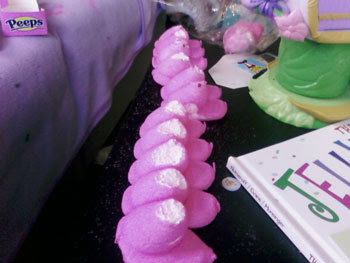 Sadly, there were no survivors.

I don't blame her. It's like a muffin; all the flavor is concentrated in the top.

All in all, a good day. She got cranky once or twice and she was quite tired at day's end (which is a constant thing now). But she has been so good these past few days. She has her vincristine later today. Hopefully that won't wipe her out too much, though she may be a bit crankier tomorrow.

Talk about a kick-butt weekend!! Have to have more of those. By the way, don't worry about Elle's periodic bouts with "crankiness." Just remember your sister as a teenager and you'll feel better right away.

You have to tell me now. Trust me, I am going to bet I will find it amusing. :)

Well, a Peep Joust involves outfitting two or three or seven Peeps with a jousting stick (that would be a toothpick) and then setting them an inch or so apart in a microwave. It's best if your microwave has one of those spinning plates inside.

Peeps have a wonderful tendency to become gigantic when microwaved. They blow up to about three times their normal size. So, once the Peeps have been outfitted for battle, you turn on the microwave and the winning Peep is the one who first punctures another Peep with the toothpick. It's better when the microwave has that spinning component, since then the Peeps appear to be chasing each other.

A couple of hard-won lessons:

Eating freshly-microwaved Peeps will burn hell out of your tongue.

Peeps, after being blown up via microwaving, are not unlike athletes after years of steroid abuse. They become hard and crusty and misshapen. You can still eat them, after they cool down, but they will not be fluffy.

Finally, best to put your Peeps on a plate or something, as well as the spinning component, and preferably a plate you might not mind throwing away. Melted Peep is not easy to scrape off of glass.

I am SO doing this!