I just had to talk about this.

Beth had picked out a very nice outfit for Elle the other day before we went out. A blue-striped dress that had the coloring reversed on some leggings. It was very cute. And then Elle got into the act.

We got some head-gear from our Aunt Deb, Uncle Carl and our cousins Jessica and Rebekah in Michigan (thanks, guys!). Elle has taken to one particular hat. She then broke out her fuzzy pink Dora vest and some new Crocs that are pink and white with pink fur and Princesses on the top.

So first, here is the closeup... 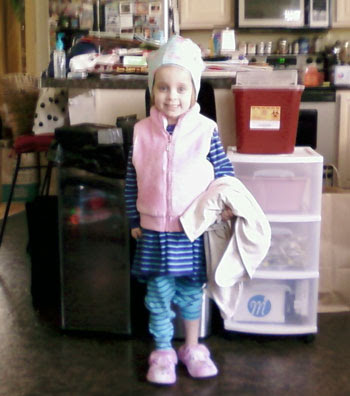 I called her "My Little Cossack" because, as you can see, she had the style down. 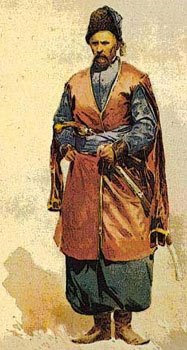 Elle's is a much cheerier Cossack, though. Spreading laughter and love instead of mayhem in 19th century Europe.

Oh, and she hasn't lost her hair yet. She just really likes that hat.

What an awesome little character she is!!!
Ian and I went to bring some dinner
to Ian's dad at work. He is the EVS Lead for the cleaning crew at SSC and 98/102. He was working in the MCCP. I explained to Ian that this is where Davey's Little sister comes to get medicine so she can better! Ian says, "Oh and daddy is cleaning the the floors for HER!!!
I will keep an eye out for yellow Share the care bracelets and buy some in Elle's name!
Have a wonderful Easter!!!
Kim and Ian

Great outfit!!! I can remember when her aunt(Kris) used to dress like that...I think it was last year.