The big deal today was the local ice cream eatery - Martel's - opening for business. We took a drive down there and Elle got a mint chocolate chip cone while Davey got vanilla. Elle finished it off and then fell asleep as we went for a ride along the shore. It was really nice.

The other big news was that we had to cut Elle's hair. We had run into an unexpected problem; hair would fall out and get tangled with the hair that was still attached to her head. We ended up with two matted masses that were just impossible to undo. So Elle said, "Just cut them out!" And so we did. She is now sporting a cut that reaches to her chin. She is much happier not having the matted hair and isn't complaining about the new cut. But her hair is getting very thin. 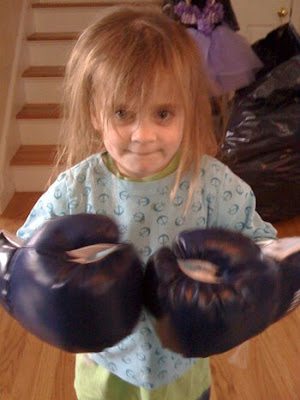 This is Elle posing with some boxing gloves sent as a gift from one of Beth's high-school friends. Thanks, Margaret! She uses them to punch me in the nose and about my back. 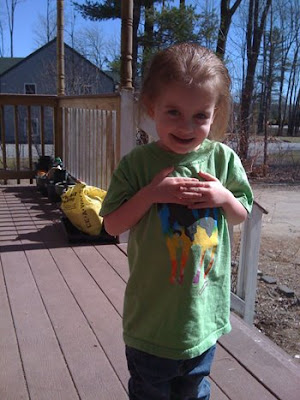 Here is Elle rocking the new haircut. You can see how thin her hair has gotten. But she is more comfortable like this. And she's still the cutest thing going. 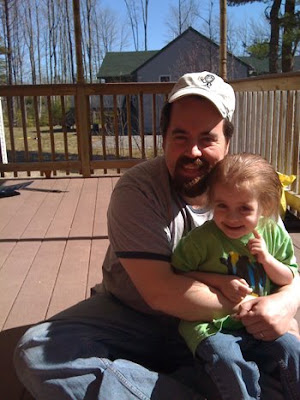 Here we are posing for a picture on the porch. It was incredibly nice here in Maine today, close to 60 degrees. We must have spent an hour on the porch today and Elle just loved it. 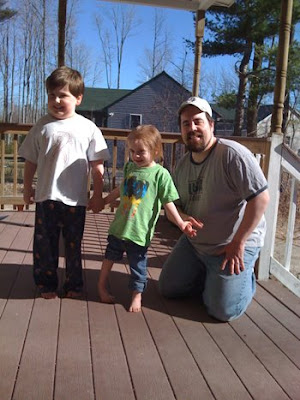 Here's Dad and the kids. Elle and Davey had a dance party on the porch later as we played some music through the window. 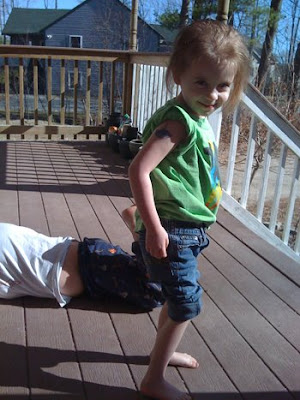 And here is Elle giving us the full-body pose to show off her Cinderella tattoo. That would be Davey in the background. I believe he is doing the "floor shake" dance made so popular by John Belushi in Animal House. Just following in my footsteps, though I had the twin excuses of college and alcohol when I did it.

Great pictures! That smile could melt nice. No,David, not yours.

Guilty as charged! Thanks for proofreading, DM(that's really close to...)

Hey, we went to Martel's for the first time this season on Sunday too! Good stuff!